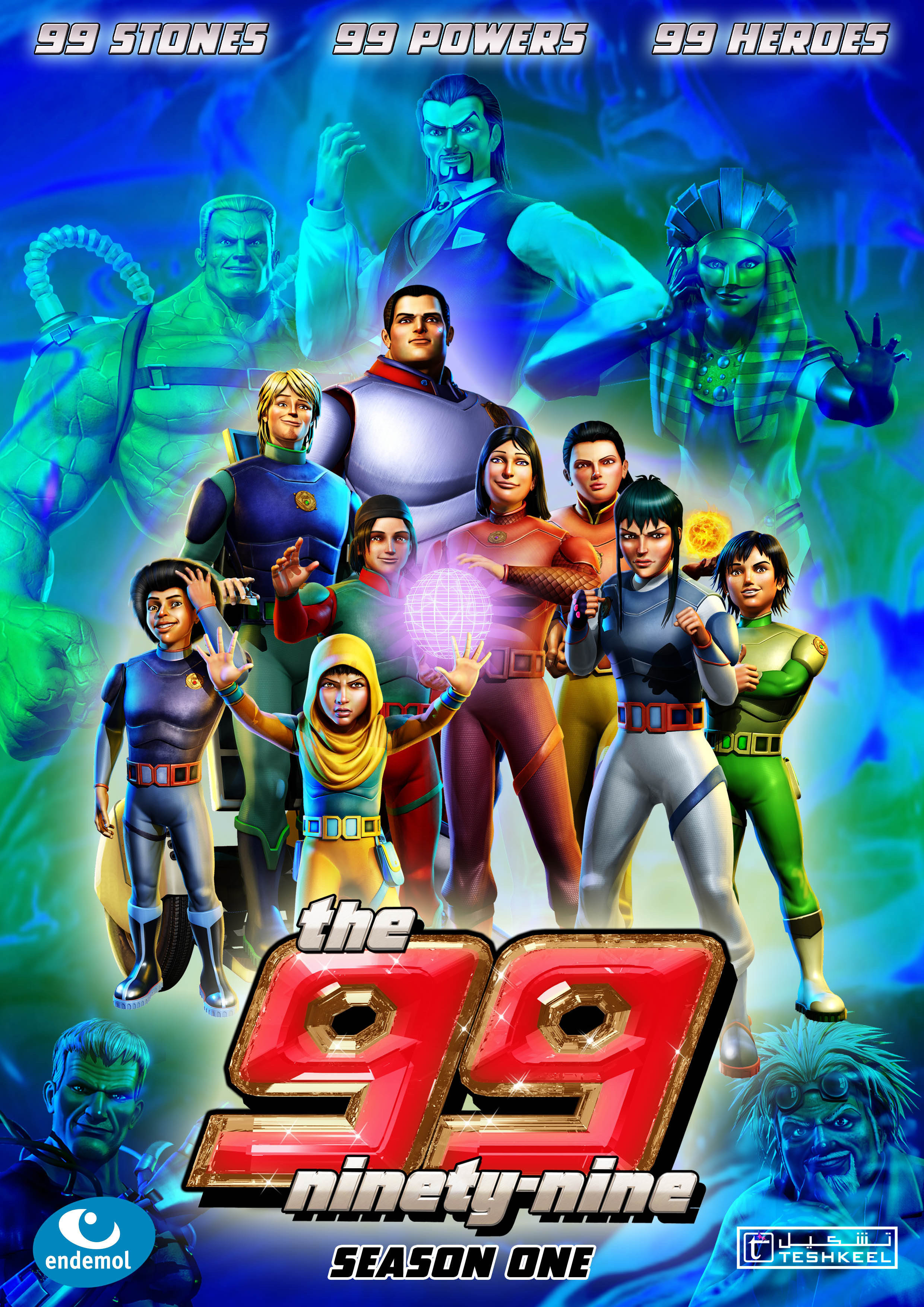 99 youngsters from across the globe, 99 ancient Noor stones, 99 superpowers. Ramzi wants them to do good for mankind, but Rughal has other ideas.

Dr. Ramzi becomes aware of an unusual trio of youngsters with superhuman powers, painting graffiti on walls in their native London streets. Noora, Cat and Hadya investigate. Unknown to them, the streetwise triplets’ powers come not from a Noor stone but from a far more sinister source. At the same time Sphinx is planning a daring heist at the British Museum, aided by a team that includes Hammerforce, Savage and Razors Edge. The 99 attempt to thwart Sphinx’s plan, but the super-villains are rescued from the skies by an unexpected ally.

Aboard the supersonic VTOL jet, Sphinx and her hapless team discover that their rescuer is a rejuvenated Rughal. A fierce battle at Batina’s refuge means that The 99 are in trouble.

With three Noor stone-bearers safely in his custody at the newly constructed Ice Palace, Rughal arranges a wild goose-chase to misdirect the inevitable rescue mission from The 99.

Keen to develop his team’s proficiency with the Noor stones, Ramzi arranges for a group of the 99 to train at an extended retreat in his Seville town house where they are surprised by a supercharged and unwelcome visitor.

Mumita, Hadya and Raqib discover the Ice Palace and the three Noor stone-bearers in suspended animation, meanwhile Rughal is trying to recruit an old ally.

A daring mission in the Kuwaiti oil fields puts Jaleel’s powers to the test and Hammerforce and Savage try and pull off a heist at the Chang Corp. Blackwolf is back in the picture.

Helping a stranded Orca whale on a Bahraini beach enables young Salman to discover his powers as Mukhit the Nourisher. In his first test as a stone bearer he helps the team deal with a fearsome enemy.

In a remote Brazilian village, Dr. Ramzi comes across young Carlos whose astounding powers with plants mark him out to be Hafiz the Preserver.

A lonely and deserted late night café in Damascus is the scene for the return of Dr. Auric Blondel, the Pathologist, one of the most ruthless villains in The 99.

As Cat, Hadya and Darr narrowly evade arrest in Seville, they find themselves in a battle to save the local Solar Power Station – which has come under attack from their own clones.

In his cyber form, Rughal penetrates the 99’s computer systems, only to find that Miklos’ firewalls are too effective.

Alex persuades Miklos to create a ‘digi-clone’ of him, an avatar to search for Blair in the virtual world.

Rughal lays a trap in Seville and successfully kidnaps Fadi and Haroun, while Mindo creates a deadly computer virus to hunt down Blair in the cyber-world.

Using the power of the Raqib Noor stone now in his possession, Rughal develops a machine that can locate Noor stones around the world.

Power cuts all over the world make the 99 suspicious that Rughal has embarked on a new masterplan to steal energy.

As energy supplies surge back to the world, an unperturbed Rughal tells his team his masterplan is still on track, and he needs only a little more power for his goal.

Ramzi gives bad news to the 99 – Cat has defected to Rughal. She must have been his spy. Deeply shaken, the 99 regroup and plan their next move.

As Batina discovers that Alex is missing from her refuge, a desperate Higgins persuades Ramzi to send the 99 to rescue the youngsters trapped in the Ice Palace.

Red Shroud steals Zoran’s Dakota and flies to the Ice Palace. Ramzi realises that Blair knew Higgins’ plan, but no-one could stop him.

Miklos and Fattah mount an operation to retrieve Zoran’s Dakota from the Ice Palace, where it was abandoned by Red Shroud. They narrowly escape the clutches of Blackwolf and Murk in a mid-air battle.

A young Chinese girl, Kam, walks into the Chang Building. She has a Noor Stone, and is Kabeera The Great. She wants Mr. Chang to help her join the 99.

Alone and rejected in the icy Himalayan wilderness, Cat survives being mugged by a truck-driver, and escapes by stealing his truck.

Shocked that Rughal could create an artificial lunar eclipse, Ramzi seeks help from the Guardian. At the Ice Palace, Rughal is making final preparations for the full moon due the next night.

Within minutes, Mindo will succeed in creating a full lunar eclipse and Rughal can finally absorb the triad of triads. But Rughal is alerted to the presence of the 99 in the Ice Palace.

« Previous project
Combat Hospital Next project »
What Happens Next