‘Hotel for the Holidays’ Captures

Nearly 500 high quality screen captures from Mena’s newest film Hotel for the Holidays have been added into the photo gallery! Be sure to catch this wonderful holiday film on Amazon’s Freevee!

‘Hotel for the Holidays’ Trailer 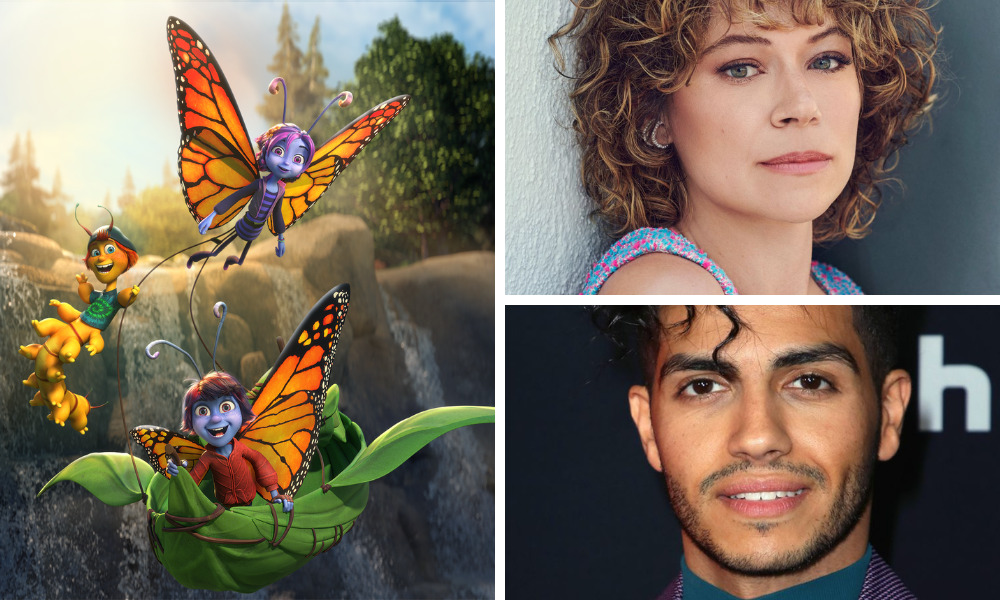 ANIMATION MAGAZINE – Montreal-Madrid based Pink Parrot Media has announced the voice cast for its 3D animated feature Butterfly Tale at this year’s American Film Market (AFM), casting the voice talents of Tatania Maslany (She-Hulk, Trollhunters, Rise of the Titans, Bite Size Halloween) as Jennifer and Mena Massoud (Aladdin, Aladdin 2, The Royal Treatment) as Patrick/ The film is set for theatrical release in the fall of 2023.

“I couldn’t be more thrilled to have Tatiana and Mena on board to voice these characters,” said director Sophie Roy. “I’ve been following Tatiana’s career for years. She’s an exciting actress with unbelievable range second to none. She is the perfect person to play Jennifer. Finding an actor to play Patrick whose character is resilient, naive, fearless and optimistic was no easy task. Mena has all these qualities and more. I can’t wait to go into the recording studio with these two talented actors!”

Synopsis: Butterfly Tale is a heartwarming animated feature film about Patrick, a gutsy and resourceful teen butterfly who cannot fly — but won’t let that keep him down! It is a tale of adventure, self-realization and heroism, told with humor, which message is that our differences are less important than the bonds we share, and it is in adversity that our true character shines through.

“We have been eagerly looking for just the right voices to portray these two wonderful characters,” said Tania Pinto Da Cunha, VP/Partner at Pink Parrot Media. “Tatiana and Mena have an enormous amount of talent, as seen in their acting credits. We are so lucky to have these two actors as part of our feature. Together, the two of them are going to bring Patrick and Jennifer to life, ready to share the adventures we have set forth in Butterfly Tale.”

The film is produced by Marie-Claude Beauchamp of Montreal-based CarpeDiem Film & TV (Snowtime, Racetime) and Emely Christians of Germany’s Ulysses Films (The Amazing Maurice, Ooops! Noah Is Gone). The producers said in a joint comment:

“We are very happy to be producing this fantastic film full of excitement, heart and fun and that we are now able to roll-out with announcements about this amazing cast! Tatiana and Mena will inspire the success of our butterflies and carry them into the world.”

Directed by Roy, whose previous credits include producer on Racetime and The Legend of Sarila, the family adventure’s writing team includes Heidi Floss and Lienne Sawatsky.

As well as being an author, screenwriter, story editor and working in series development for shows on HBO, FOX, PBS, YTV, Nickelodeon and BBC, Floss is a well-known Canadian stand-up comedian. Floss recently served as story editor on the first season of Air Bud Ent.’s Pup Academy (Disney).

On behalf of myself, The Mena Massoud Network visitors, and the rest of Mena’s fans, I would like to wish him a very happy 31st birthday! We all are wishing you a great year full of happiness, joy, love, luck, success, health and peace. And most importantly, thanks for being such an amazing person and inspiration to all of us.

Set in the Hotel Fontaine in New York City during Christmas, the holiday pic sees Georgia, played by Petsch, as a hotel manager who attracts eclectic guests looking for an escape from their everyday lives. But Georgia’s work and personal life becomes entangled when she is caught between the charming hotel chef Luke (Massoud) and a sophisticated ex-prince staying at the hotel.

Hotel for the Holidays, produced by Brad Krevoy’s Motion Picture Corporation of America, will debut this holiday season exclusively on the Amazon Freevee streaming service in the U.S. and UK.

The film is directed and executive produced by Ron Oliver, and written by Maggie Lane and Margarita Matthews.

Petsch is represented by CAA, Mosaic, The Lede Company and Goodman, Genow, Schenkman, Smelkinson, and Christopher.